MORE than 500 dog-owners are fighting to have off-leash access times during summer evenings on two beaches.

While dogs can run free on summer nights on five beaches – three in St Kilda, as well as Sandridge and Port Melbourne- dog-owners say there is so much evening beach activity that Port Phillip council needs to open two more to dogs.

South Melbourne dog-owner Nicole Farren said it was important to get evening access because of the proliferation of people and activity on summer beaches at night, ranging from kite-surfing to beach volleyball.

“If you go to those beaches at night during the summer, there is a lot of activity going on but if you had two more beaches it spreads it out and gives dog-owners other choices.”

Ms Farren, the owner of a dog day-care centre, said this was one of a few improvements an informal group of dog-owners was pursuing to make life better for the animals.

The groups has petitioned the council to implement the changes immediately. It read: “The dog community in Albert Park is a huge part of positive village life, which provides support and a sense of belonging for all residents.”

The council said it would consider the petition as part of its draft Domestic Animal Management Plan. 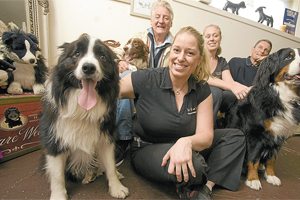 Tonight’s the night Cocoa attends the CEO Sleepout for the homeless. There’s...

About the business and the role This well established and successful dog daycare centre...

diggiddydoggydaycare is officially on the move. After almost 8 years in our current...

You are invited to a very special event…. Very Important Pooch & Person (VIP)...

Dr Gary Landsberg debunked some common behaviour myths in dogs at the...

Contact us today.
One of our friendly staff will be happy to help.